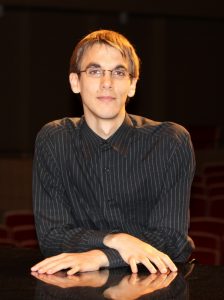 Cypriot pianist Andreas Ioannides is currently a Fellowship recipient at the Jacobs School of Music at Indiana University, where he is pursuing a Doctor of Music degree under Menahem Pressler.

His playing has been heard in such diverse venues as the Grosser Saal of the Hamburg Konzerthaus, the Culture and Congress Center of Lucerne, the Temppeliaukio Kirkko in Helsinki, Municipal Theater of Rio de Janeiro and the Kennedy Center in Washington, D.C. Ioannides has made orchestral appearances under maestros Neil Varon, David Effron, Paul Nadler and Roberto Tibiriçá, and has also collaborated on chamber music projects with such artists as Joseph Swensen, Atar Arad and Peter Stumpf.

A passionate chamber musician, he served as Fellow at the Tanglewood Music Center in the summer of 2016. During the same year he awarded the British Prize in the Hastings Competition in the UK and Third Prize at the prestigious BNDES International Piano Competition in Rio, Brazil. Upcoming projects include his debut recording under the Naxos label in the summer of 2018.

Scarlatti Sonata in A Major, K.208

No.6 “for Eight Fingers”