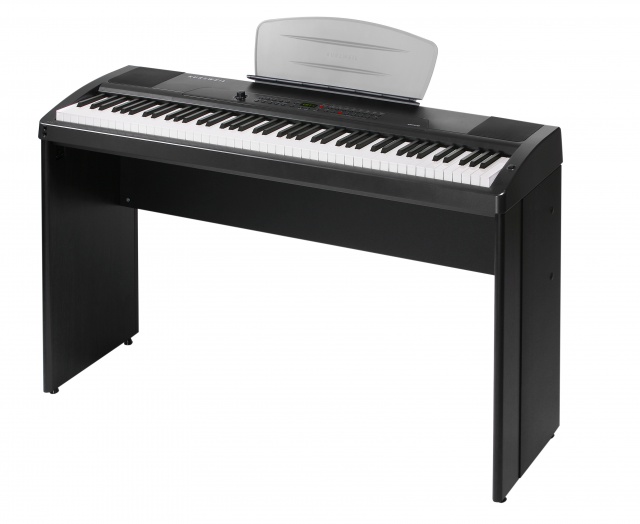 The New MPS20 is the ultimate “Pro-Consumer” portable piano for the home user, studio player, student, or pro gigging musician.

The MPS20 more than doubles the amount of pianos & organs found on the MPS10. Included are 24 pianos featuring Kurzweil’s newest “Pro Piano” program. With 100 rhythms & 10 drum kits, the MPS20 goes beyond conventional piano features including a built-in library of over 200 sounds taken from the PC3 series keyboard. Included are a variety of categories, each with their own custom default voice preset. These include, electric pianos, tone wheel organs, pipe organs, strings, vocals, orchestral ensembles, synthesizers, and many more to inspire creativity.

The MPS20 is Kurzweil’s first digital piano to feature the all new LK40 GH Graded Hammer “Escapement” Action Keyboard. The MPS20 keyboard grades the hammer weight in 4 zones, from heavier in the bass, to lighter in the higher octaves. The action also features an escapement, which reproduces the let-off and jack engagement of a real acoustic piano.

The MPS20 is also offered as the MPS20F, featuring an upgraded Real-Grand™ Hammer Action made by Fatar (Italy).

All specifications subject to change without notice.

If you’d like more information about this product, just complete the form below and one of our representatives will be happy to assist you.