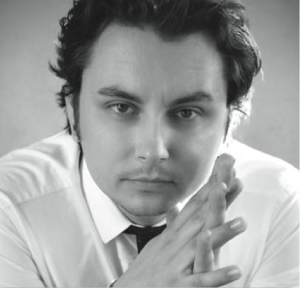 Polish-born pianist Martin Labazevitch studied at the Odessa Conservatory in Ukraine and later at the Manhattan School of Music in New York. His main teachers and influences include Horacio Gutierrez and Bella Davidovich. Martin’s awards and acclaims include those at the Jose Iturbi Competition in Valencia, Campillos Competition in Malaga, Hilton Head Competition in South Carolina, as well as Rina Manashe Award in Israel, and Harold Bauer Award in New York City. His multifacated career inludes solo performances, chamber music concerts as well as performances with orchestras in Poland, Spain, Finland, Austria, Ukraine, Japan, Lithuania, and the United States. His last recording of the Chopin Piano Concerto No.2 and the Fantasy on Polish Airs, Op.13 with the Beethoven Academy Orchestra for Poland’s DUX Records has met with ethusiastic acclaim. Martin’s favorable reviews include those in The Strad Magazine – United Kingdom, Cleveland Plain Dealer – United States, 7 Meno Dienos – Lithuania, Diario de Leon – Spain, and Echo Dnia – Poland. Martin’s extramusical interests, besides theater and cinema, include travelling (which fortunately is a part of being a musician) and exploring the cuisine of the places he goes to and later trying to recreate the dishes at home. He looks forward to trying the legendary Creole and Cajun cuisines of New Orleans.

“To me being a musician is like a multilayer cake. We are the entertainers, consolers, educators, cultural ambassadors, sometimes very bad or good role models, but most of all we carry a huge responsibilty of continuing the tradition started by the biggest musical geniuses in the history of the world. Sounds very serious, but fortunately there is so much fun to it!”