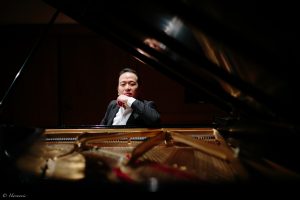 Sung Chang was born in Seoul, Korea, and began playing the piano at the age of three. At age five, he gave his debut concert and became the youngest winner of the Nagoya International Piano Competition in Japan.

At Germany’s International 13. Wettbewerb der Chopin-Gesellschaft Hannover, he was also awarded first prize and the audience prize. Most recently, he was awarded silver medal at the 12th San Antonio International Piano Competition, along with two special prizes.

Chang completed his undergraduate studies at the Korea National University of Arts and successfully completed the Musical Performance and Postgraduate Program courses at the University of Music Drama and Media Hannover in Germany.

Field Nocturne No.18 in E Major